31 May
2016
I've been having a maddening problem where one (but only one) of my heroku apps doesn't know which heroku app it is, which means I need to append --app app-name to every single command. It seemed to happen when I moved my app to an organisation rather than having it on my personal account, but in fact the problem was that at the same time I did that, I set up the build server to deploy it - and so I removed the old heroku git remote and then never added the new one because I exactly shouldn't be pushing to heroku from my laptop as we now deploy via Jenkins.

I was looking for some config file or something that heroku would read but what it actually does is look at whether any of your git remotes are heroku and if so, assume by default that you mean that project! The git URL is on the "Settings" screen from the Heroku web interface, and you just need to add it as a remote to your local project:

Hopefully this helps someone else stop having to type --app app-name every time they need to do something with their app, it was a tiny problem but quite an annoying one!

18 Sep
2012
I write a lot of APIs, and I also preach that your API isn't finished until it has excellent documentation. Which is great, but that means I therefore have to lead by example and document my APIs :) Enter iodocs from the talented folk at Mashery.

Iodocs is a node.js application (which is fun for a PHP developer. Most developers write a bit of JS, but this one hasn't). You describe your API and all its methods in JSON, and then iodocs presents an interface for you to enter API keys, add parameters to each request and press the "try it!" button. This makes your API call and shows you the results on screen, which seems like a great way to demonstrate what all the various parameters do! 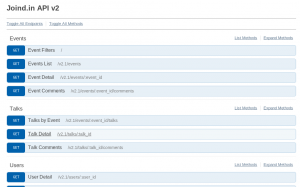