15 Jun
2009
Often when I attend PHP conferences, I blog as I go along, upload a few photos and generally share with others who aren't in attendance. At DPC this year I completely failed to do any of the above - no excuses, I was just having too much fun :)

I travelled over on Wednesday and met up with a bunch of colleagues/friends at the airport, so we could make our way to the hotel together. We arrived to find colleagues and speakers already in the bar and it was great to see so many old friends and meet new ones. Thursday was tutorial day, this is a separate day with in-depth sessions that run all day. I attended the Zend Framework tutorial delivered by Matthew Weier O'Phinney from Zend, which was really good. There was a similar session last year but that was quite basic - since then I've worked a bit with Zend Framework so this session suited me really well and showed me some stuff that I've been struggling with. We rounded off the day with an Ibuildings social, giving me chance to catch up with my colleagues and enjoy the free bar (thanks Ibuildings, great opportunity to see everyone!).

On Friday the sessions got off to a flying start with the keynote from Andrei Zmievski, Open Source Fellow at Digg. One thing that I always find simultaneously wonderful and intimidating is how the speakers at these events mingle with everyone regardless of how qualified they are. This creates a great atmosphere at the events, and makes the speakers very available. You couldn't pay for the experience of running into someone in the bar whose talk you saw and having them happy to answer a couple of your questions about it. I have no idea if this happens in other industries but it surprises me every time.

Probably the biggest "problem" at this conference was the excellent schedule. Its a good problem to have but it does mean that I had issues with every session deciding what I wanted to see - more so than any conference I've been to yet (are you listening, conference organisers?). I only sat out for one of the time slots and that was mostly because I was very tired and the talk I wanted to see was packed :) Friday ended with a happy hour social at the bar next to the venue, which was great - it seemed like all the speakers and most of the attendees were there, and everyone was moving around and talking to everyone else, which was a lot of fun.

Saturday was more great sessions and held a couple of highlights for me - two friends of mine, Ian Barber and Juliette Reinders Folmer, gave their first conference talks at DPC this year, in consecutive sessions. I was able to attend both sessions and they were both excellent (and handily they both spoke on subjects I was interested in!) - and I even managed to put my head around the door of the Oracle Installfest which was also happening through Saturday morning. Saturday afternoon saw the last of the sessions and a closing keynote entitled "The Cal and Ivo Show (with friends)", in which Cal and Ivo talked over a couple of points between themselves and then invited some of their "friends" onto the stage to be asked a few questions. It turns out I fall into the "friends" category so despite the fact that I wasn't there as a speaker, I still managed to find myself on stage with a microphone! 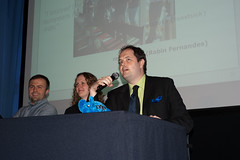 I'm a big fan of conferences, I like to get to a few each year. Sometimes I'm an attendee, sometimes a speaker, and sometimes an organiser - if you've seen me talk about communities, professional development, or speaking then you've probably heard my thoughts on these events and how much can be gained whatever the reason that you attend. DPC is a pretty special event - Amsterdam is well connected and we had attendees from all over Europe, some from the US, and even a few from further afield! The sessions, as I say, were the best I've seen and I wish we could do it all again so I could try to get to the bits that I missed. Its a great crowd at the Dutch PHP Conference, always someone to talk to and I actually know quite a few people who attend - and I don't often manage to see some of those as they live elsewhere in Europe.

I hope everyone who attended had as much fun as I did - see you all next year!