05 Mar
2009
In January, Kevin and I went to Peru for a few weeks – to visit our friend Cally, and we did some touring while we were there. Between the two of us, we took almost 3,000 photos. Which is way too many to make granny sit through when we got home. I tried showing people the photos I put on flickr, but they make little sense since Kevin has (at least) half the good ones in his flickr stream. So instead, got a blurb book of our holiday photos – to easily show people, and to keep. 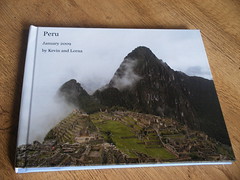 Apart from a few that came out darker than we expected, and the book taking WEEKS to arrive, its absolutely ace! Some of the photos look amazing in print – even more so than they do on the screen. We rarely have hard copies of any of our photos so this is quite a treat for us as well, and the book is really nice quality for us to have on our bookshelves.

Doing it this way was much less labour intensive than getting them printed and then scrapbooking them up or something – OK potentially this was less fun but at least its actually done and not sat on my to-do list :) We did all the layout ourselves, combined both our flickr sets (after we’d both gone through and edited and captioned the lot anyway), and just pressed the button. A few weeks later, the finished book arrived – yay!