16 Mar
2009
Yesterday I took the opportunity to pop along to the Maker Faire in Newcastle – its so exciting to see events like these in the UK! The marquee there was pretty small but what it had was great fun. I saw several things there that had me really drooling – one was a harp, another was a bracelet with LEDs on it, the idea being that you could have the LEDs get more intense or more agitated when you received more tweets/emails (except this wasn’t a working prototype, just a pretty idea). There were all sorts of other people there, including folksy and oomlout and an O’Reilly stand where I bought an instructables book.

We also popped over to the Discovery Museum, just up the road where there were a few more events happening. I haven’t been before and had a lot of fun looking around the various bits, especially the Science Maze. At the back of the science maze was a workshop where you could make a “throwie” – an LED taped to a battery and some magnets, for throwing at fridges and things, and then a darkroom with surfaces to throw them in. 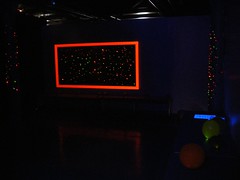 Later on there was an appearance by the “robot” Titan. He arrived, and stood up … I was astonished to see a walking robot (walking is really tricky), especially since his shoulders seemed very large – and in the next heartbeat I realised it was a man in a grey plastic suit. There’s a few photos though on my flickr stream along with a few others from the day.

All in all I am very excited to see something like this happening in the UK and am on the look-out for the next event of this kind.