27 May
2009
Last week I was at the php|tek 2009 conference in Chicago. This was a really exciting trip for me – only my second conference as a speaker and the first time I’d attended any of the MTA conferences. I was absolutely delighted to have three of my sessions accepted into the schedule – although it seemed like a lot of preparation, I actually headed out to the conference feeling relatively prepared.

I spent the morning finalising slides with my co-presenter Matthew Weier O’Phinney … well, we looked at the slides before we wandered off to Starbucks anyway :) The trouble with preparing talks with someone that is both on the other side of the world and has a wildly important job (and gets promoted in the middle) is that its sort of hard to get together and organise these things. Actually the material was in surprisingly good shape on the day and our session was well-received – the slides are available. 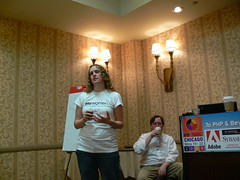 Immediately after our session, Matthew and I were interviewed by Keithy Casey and the video is available if you’re interested.

After a relaxing Wednesday where all I did was show up to sessions and get my picture taken with the phpwomen, Thursday was a pretty crazy day. I had two talks scheduled, and both were in rooms that turned out to be unbearably hot. First I gave a talk on a topic I’m actually really excited about – Linux-Fu for PHP Developers – which was an overview of the commands I type when I’m working with linux. You can see the slides but I’m considering splitting this talk into two sections if I want to give it again – one introductory and one all about the tools I used. It’s the tools that are most exciting and I think that came across when I was giving the talk.

A couple of hours later I gave a talk entitled “Using and Understanding the Community” with my Ibuildings colleague Stefan Koopmanschap. I was surprised how many people attended the talk – there was a great atmosphere in the room and best of all were the people who came up to me later to say we’d inspired them to get more involved. I was even more surprised to have Cal Evans inform me later in the day that we had a slot scheduled in the uncon for the following day to give the talk again for those who missed it! There are no slides for this talk, since we only had one slide with a few URLs on it, however the second edition of the talk was recorded so the audio I guess will get published at some point – I’ll post here when this happens.

Things got a bit more light-hearted at this point as we had a slot in the unconference for a PHPWomen Craft Hour. All sorts of people turned up and knitted, crocheted, made lace, dismantled novelty cars, made pipe cleaner animals, and all sorts of other things. We had a great laugh and it was cool to meet some new faces. Hope we do this again sometime! 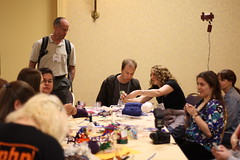 Finally for this day I gave a more serious uncon slot (with the craft still going on at the back of the room!) entitled “Architecting Web Services” – this is a talk I’ll be giving in Leeds this week at the FOWA Tour so it was great to try out the session with such a qualified audience at php|tek. Many thanks to those to attended and gave their input, I’ve re-worked the slides and will post them after giving the talk tomorrow.

All in all it was a great week – meeting new friends and catching up with old ones, and getting some great technical content in terms of both talks and hallway discussions too. Thanks to everyone who helped me have such a great time there – hope to see you all in the future :)