16 Aug
2010
I spent the weekend in Bristol so I could attend cicon2010 – a volunteer-organised first-edition conference around the CodeIgniter PHP Framework. It started on Saturday morning with registration at 8:30am and the first talk at 9am. When I arrived (at about ten to nine) there were no organisers there. I took this photo around 9:45 (the camera is on GMT) as they attempted to set up the projector. 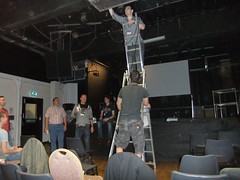 I saw two talks, both of which were actually really good, which is pretty impressive when you’re going on stage to a rather fed up audience! Kudos to Kevin Prince and Joel Gascoigne for their talks. By this time we did get an announcement about what times the other talks would happen and I snuck out for lunch and cups of tea.

When I popped back (I assume there was a long lunch as I didn’t get there until almost 4 and still caught the last two talks) I saw Adam Griffiths and Phil Sturgeon round off the day with their talks, and I must admit that I think the talk content was spot on, although the speakers were mostly pretty inexperienced, they all had some great thoughts to share and I did get some technical content from it (and a list of new friends, thanks Phil!)

I had been looking forward to the conference social but after hanging about in a strange city on my own waiting for a promised tweet of time and location, I bailed. The people I met at cicon were a nice crowd and I’m sure it would have been fun but I got some other stuff done instead which was also useful.

In summary: nice people, useful content. worst event I think I’ve ever been to (sorry guys).

I tweeted about my disappointment and got a couple of people asking me what my advice is for events organisers. I’ve now done a few technical events and will wrap up my advice into a post (now I’ve outlined it, probably more than one post!) so look out for that over the next few weeks.

(as a total aside but kind of for the record, for an event with 40 ish people, I was disappointed to be the only woman there)