03 Feb
2010
Last weekend I was privileged to speak at the inaugural PHPBenelux conference in Antwerp, Belgium. Since Ibuildings is partly a dutch company I combined this with one of my regular trips to meet with the people there, visiting both our offices in the Netherlands and catching up with a bunch of colleagues in both locations before making my way to Belgium for the main event.

The conference itself was very well organised and the venue worked very nicely. I liked the hotel (I’m accustomed to London hotel rooms so European ones always seem huge), which was nice and had an English slant on breakfast since sausages were available alongside the cheese and pastries! The venue itself was just across the car park and had plenty of rooms with an open exhibition space which worked nicely – the two tracks were on opposite sides of this space so the footfall for the exhibitors was hopefully good! Full marks go to the crew: 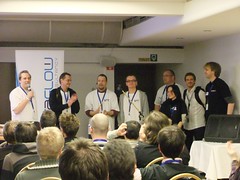 I gave my talk “Passing the Joel Test in the PHP World” with some updates since I first gave it at PHPNW09 in Manchester. This is a nice best practices talk and although I didn’t have a lot of people in my talk, this was no surprise since Ivo was speaking in the same slot as me with his “PHP and the Cloud” talk, which I STILL haven’t seen! If you are interested my slides are here: http://www.slideshare.net/lornajane/passing-the-joel-test-in-the-php-world-phpbnl10 Thanks to my audience who were great and managed to stay enthusiastic despite my nerves and the late afternoon slot :)

One thought on “PHPBenelux: Recap”