26 May
2010
Its been quiet around here recently, partly because I have been really busy and partly because I was in Chicago last week for the wonderful TEK-X conference. It would be very cool to get to go skipping around the world to conferences, however people paying for my airfares do seem to like me to perform some useful function while I am there and this was no exception with one tutorial and two talks to deliver, plus an appearance on a panel. I’ve attended this conference in previous years however so I knew it would be well worth it :) My sessions and an overview are outlined below:

I was privileged to get a tutorial slot alongside my good friend Matthew Weier O’Phinney for a second consecutive year. This year we presented “PHP Best Practices” which was a lot of fun. We squabbled over topics and took turns presenting them from our own point of view. A description of the session and a link to the slides are on the joind.in page if you are interested.

Subversion in a Distributed World

Now that this talk is finally over, I don’t mind admitting that this was the one that I regretted submitting pretty much from the day it was accepted until the day I delivered it, including some rather sleepless nights. It was an adaptation of my “git folks are fanbois” bar rant but I got so concerned that I wasn’t supporting my accusations with facts that it evolved into a very coherent evaluation of what I consider to be the four main version control tools around at the moment: Subversion, Mercurial, Bazaar and Git. The talk went over better than I could ever have dreamed, and again you can find description, feedback and slides on the relevant joind.in page. If someone could please stop me next time I submit a talk that needs as much work as this, that would be awesome!

I almost didn’t submit this talk, since its so very difficult to get a community talk accepted at the big conferences. They usually have one, at most, and I wasn’t sure I was in the top one of submitters on this topic. But, I had a transatlantic airfare to justify and I figured it might make a good second talk – I also know Cal well enough to know he likes a slightly contraversial take on these things. When he accepted it I was fairly surprised and actually quite nervous about spending an hour talking about myself in a conference session! I spoke without slides, so there aren’t any, but you can read the outline and feedback on joind.in. In a nutshell: get out and do things, you will reap the benefits one day.

I had a great time in Chicago, and also managed some touristy outings into Chicago: 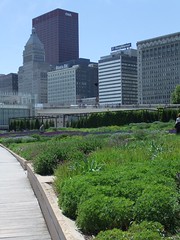 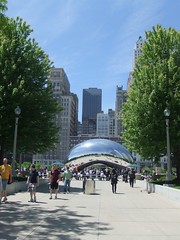 The conference itself was quite a rollercoaster, not least because every session I delivered was written from scratch for this conference and I spoke at two other big events this year already – 4 sessions over 4 days is a tall order however you look at it and I had pushed my own boundaries a bit with the talks I submitted (for the record, I submitted plenty of perfectly nice, ordinary, technical talks that somehow didn’t make the cut!) On the final morning I delivered the career talk and then immediately sat on the community panel. I was aware of people saying to me “have you seen twitter?” but I had to turn around between sessions so I just nodded, smiled, and got settled for the next session. The upshot of that was that I sat in Marco’s closing remarks and read 2 hours worth of tweets about me, plus all the joind.in feedback on both sessions, all in one go.

At the risk of understatement, the feedback was totally out of this world, I couldn’t believe how well the sessions had gone over and it took me about 3 days to get over the shock … which is another reason it took me so long to write this post.

I’d like to say thanks to everyone who was there, left feedback, helped me prepare or just showed up to the conference and joined in the event as a whole. Stay in touch and I’ll see you all next year :)