23 Mar
2011
At one time I wrote a lot on this blog about houses, and this house in particular once we bought it 4 years ago. One major feature is that the basement kitchen floods fairly regularly, maybe 4 times a year? This is obviously not ideal however the structural work required to put it right was around 20% of the value of the house, and shortly after we bought the house the bottom dropped out of the UK property market so we couldn’t borrow against the house.

Fast forward 4 years of cooking in wellies once in a while, and running down the stairs to check the basement every time it rains a lot (in Northern England, you can imagine this gets really old really fast). Actually even when it wasn’t underwater, it was a pretty nasty kitchen, always damp and it had no heating so in winter it was whatever temperature it was outdoors. This sums it up: my mother’s old dresser, standing on bricks to keep it out of the water 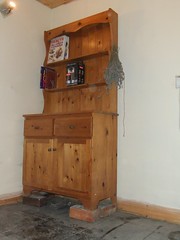 The tanking process is many-dimensioned and I don’t have as many good photos from the kitchen bit as I do from the other half of the house so I’ll post about the science another time, but suffice to say the entire place was gutted, the wiring/plumbing ripped out (just as well, the whole thing was so badly put together which I guess is what happens in a 100+ year old house), then they build a waterproof inside layer, and insulate it, and make you a new room inside that. We have guttering around the outside of the rooms and it all drains into one sump and gets pumped out to the drains in the road.

I packed up half the contents of the kitchen in October, they started work in November, I ran the kitchen out of the building site until New Year, then camped in my office with the camp stove and washed up in the bath through January and February and into March, and we’re all back in and sorted now I’m writing this post … in late March. So it was quite an undertaking and I was working from home, starting my new business and trying to project manage this at the same time. I’ve definitely had more fun in my life! I picked a few photos to show the transition, look out for doorways, windows, and chimneys (we only have one of each), the new kitchen layout is nothing like the old one, I’m told it’s disorientating if you only have photos. 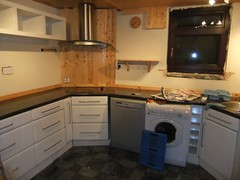 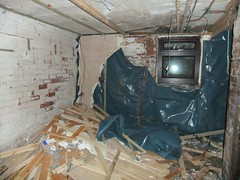 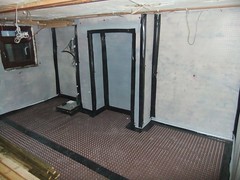 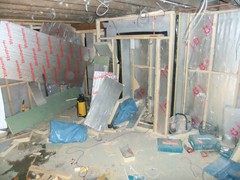 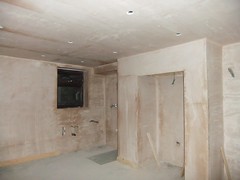 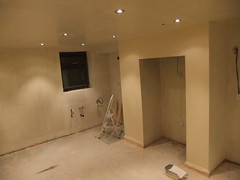 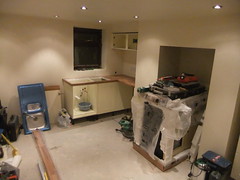 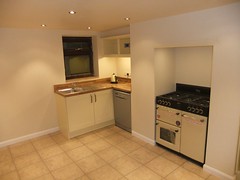 So when people say “new kitchen?”, well yes, but that completely misses the point. It is dry and warm in my kitchen now. Nothing will be mouldy or rusty or both. The teatowels will dry, the cups don’t make your coffee cold the moment you put one into the other, I won’t be throwing out bags of flour every few months. We can sit down there and eat, hang out while someone cooks, and (look at that cooker) feed any passing armies. I didn’t really need shiny new cupboards or floors and basically I picked the simplest, least offensive options of both … and I’m surprised how well it all works.

There is a full set of photos on flickr, showing the entire building project. I’ll write more about the various bits and pieces, and all the new rooms (we did the entire basement floor of the house), eventually. For now, this is the view from where I am: 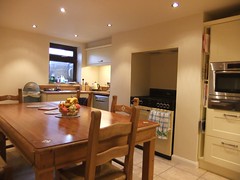