28 Jun
2012
Just a quick tip because I’m working on a different git workflow at the moment with one of my clients, and it struck me that this usage pattern is something I don’t usually write or speak about at all. Most git setups have one “main” repository, and either:

In this case, I’m working with the second option, so I’m pushing to the upstream repo. I’m also pushing to a live repository as well, so I thought I’d outline the commands I’m using. The setup here is the main github repo, and I have my own fork of that, which is cloned onto my laptop. I can push to both that main repo, which I’ll call “upstream” (because the github documentation does and it makes sense!) and another repo that I’ll call “live”. All in all it looks something like this: 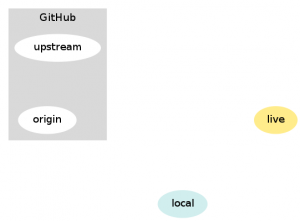 Keeping in sync with the upstream repo is the same as it is in any setup: we want to pull everything from upstream into our local clone of our own repo, then push back to our origin. Here’s both the diagram and the commands I’d use: 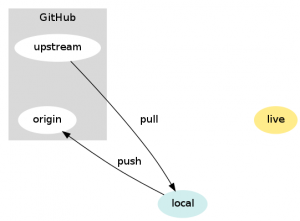 Note that when we git push, that’s defaulting to the origin repository to push to. In the next section, we’ll push to other locations …

Pushing Changes to Other Destinations

I’ve got remotes added with the names you see on the diagram – the origin is added for me, and I’ve added the upstream and live repos as remotes. When I make a change on my local copy, in a system with a gatekeeper I would push it to my origin, then make a pull request.

In this setup though, I have the privileges to push changes into the upstream repo, and also to the live one (which triggers a live deployment, as you might guess). I’m literally pushing to two more destinations, here’s the diagram and code for this scenario: 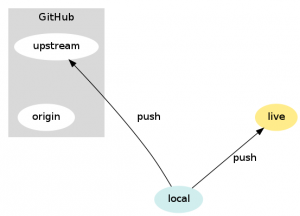 And there you have it – once we understand what goes where, we can push and pull between the other repositories really easily. Many setups will also work with branches other than master as well, this is just a simple example – where you see “master” in the commands, you can use another branch name.