14 Jul
2018
We built our first “big” project (well, since the play kitchen a few years ago) since moving to this house nearly a year ago: a new kitchen island! I used to blog a lot about the house and crafts and things, then I got better known for code things and got stagefright and stopped … but I love this stuff and I’ll blog it if I want to :) 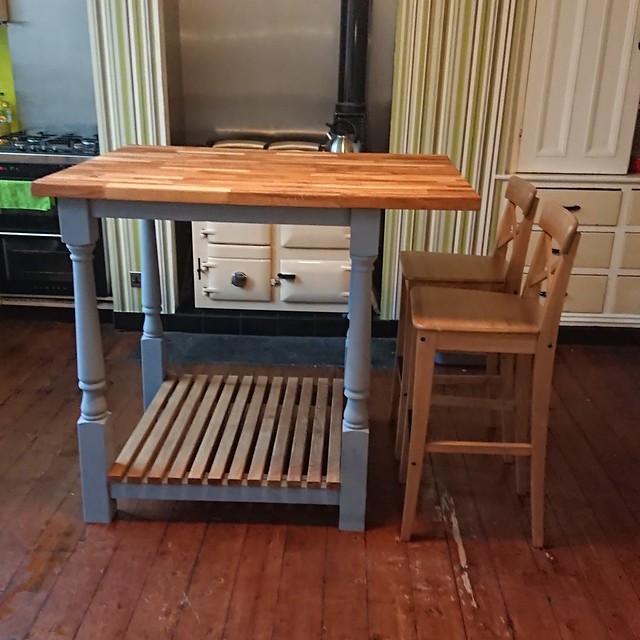 (if you weren’t expecting to read about my hobbies, then you may want to switch to the tech or PHP categories specifically rather than taking the general feed)

It’s four pine newel posts with the tops cut off, the solid oak worktop is from IKEA (they do their RÅSUNDA in 90 inch width), some pine cross pieces from whatever was lying around the workshop, and the lower slats are from some oak boards we were surprised to find in B&Q! We now have both a table saw and a router table so getting the boards into slats and then rounding the tops was time-consuming but very achievable. We used mortice and tenon for the lower cross pieces and sliding dovetails for the top joints … the dovetails were easier to do since it just needs a router bit, but harder to get right so more practice is definitely required. The main challenge was that it’s bigger than a doorway so in order to be able to move it between rooms some day, we couldn’t glue the joints in one direction – it’s pretty stable though, with some corner braces to help and the top screwed on.

We made it higher than an average island – we’re a tall family and at 110cm high, it’s also a decent height for me to use as a standing desk for a short time if I need to. Since I struggle with RSI and my laptop setup, this will be the first time I can use my laptop anywhere other than my desk in about 10 years so that’s quite exciting by itself (and a bit more sociable, it’s not that unusual to have coding friends over).

We didn’t work off any particular plans (more planning might have helped if I were brutally honest!), but I did spend some time on pinterest for inspiration before we began. Turns out, I woodwork like I cook: I do read cookery books, but then I leave them by the armchair, head into the kitchen and improvise! This house has a great workshop space so there’s a risk of more posts where this one came from :)