13 Nov
2007
The house, as I may have mentioned, has been in disarray lately. Since buying the place at the end of May we’ve had the guttering and verge boards replaced, central heating fitted (involving moving the boiler), and the entire house rewired including the bonus addition of smoke detectors, outside lights, switches that are halfway logical, and a bonus extractor fan. I think its probably best if the stories of an electricity supply which has no earth, sockets were seen to be melted inside, junction boxes in every wall and floor, and the moment we discovered that turning off our electricity at source turns off next door’s as well, are all saved for another day.

All the building work has meant that we’ve done almost nothing to the interior of the house, knowing there would be mending to do when it was finished. So now I have channels in the walls: 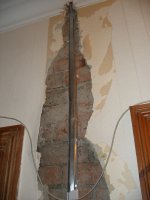 Unfortunately due to the complications of doing the wiring (the electrician says he’s done hotels faster than he did our place), there has been some damage that we didn’t anticipate. Not all the the floors are going to back the way they were, so we may have to live with floorboards for a while. I was surprised to find that the floorboards in the hallway are painted: 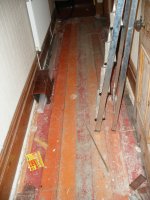 We’ve done well to get all the work done quite early on, but its going to be a long winter of learning to DIY – wish us luck!!

PS If the title doesn’t mean anything, then you need to know of The Gas Man Cometh.

2 thoughts on “The Tradesman Cometh”