26 Aug
2008
I can't remember another post which was in both the "tech" and "craft" categories - so no complaints from either camp please! Last week I became the new owner of an acer aspire one netbook/ultra mobile PC. Its little, blue, and very cute! If you want to skip the tech bit and read about the cosy I made, click here. 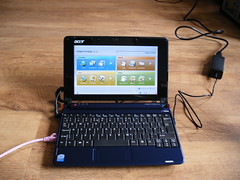 The hardware isn't the best in its class, but it isn't the most expensive machine either. It has 512MB RAM, 8GB hard drive (solid state drive), it measures 8.9 inches and weighs just 971g. 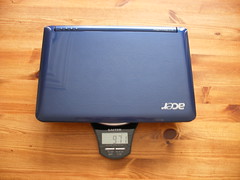 The default OS for the linux version is something called "Linpus Lite", which is a kind of toddler fedora as far as I can tell. I'm a long-term linux user and I found the locked-down-ness and the limited interface quite difficult to get started with. However with some help from this nice walkthrough plus some tips from the aspireoneuser.com forums I managed to get root access, turn on the xfce right-click menu and add a menu to the panel, install Opera and Skype and customise the main menu screens. Oh and have multiple desktops, which I like.

Its great for reading feeds, email, chat, and so on, and that's probably all I'll use it for. Since I often develop on a dev machine over vim + ssh, I might develop from this machine but I don't think I'll develop on it very often. I have already been tripped up by not having particular programs and not knowing what to use instead. Konqueror is leaving a big gap in my life, I do use it a lot. I haven't done much with fedora before, I'm sure yum is great but it isn't aptitude. Also the weird "the default user logs in automatically, needs no password, and has instant sudo rights" setup makes me twitch. We tried turning off the sudo rights but bits of the desktop stopped showing up so I've left that as is.

There are some definite disappointments. The multi card reader claims to read XD cards - this is a big selling point for me as I have reason to be on the road with camera and laptop soon and I have a fujipix camera which takes an XD card. Well, XD cards do not work with the acer aspire ones so far as I can tell. We've dug through the drivers and it looks like it just isn't set up to do it at all. I'm logged a support email with Acer but no response just yet. I bought the machine through PC World which seems to reduce the amount of support Acer gives, which is a bit disappointing as I didn't know that before I did it (nobody else seemed to have supply, and they are local if entirely unfriendly. I know I don't look like a proper geeky business user, but that doesn't mean you can ignore or patronise me). The wireless won't resume if it was turned on and the machine hibernates, you have to turn off the wireless before you do that, which seems like a little niggle but when you have lots of tabs active and you have to reboot to get your connection back ... its really annoying.

All in all, I would usually have waited for a second generation machine but this is cute, it seems pretty robust, and withouth being very expensive it does everything I need. And at less than 1 kg, I can actually carry it without getting shorter in the process, which is more than I can say for my laptop! There is online evidence of people successfully getting proper ubuntu installations onto these machines and I'm very tempted by that idea.

I have been busy installing the new toy, but I have also been busy making it a cosy! 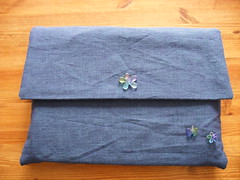 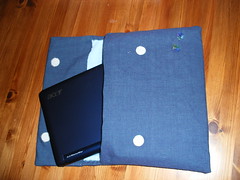 Its canvas on the outside, microfibre cloth on the inside (its really shiny and gets fingerprint-y, its good to have the soft inside) and it has rigid panels (made from a plastic placemat that got too close to me while I was feeling inspired). I made two simple envelope-type bags, put them inside one another, and stitched the lining into the outer. The fastenings are sticky dots of velcro (which I shoudl have sewn in because it doesn't stick well to fabric, oops), and the beads are ones I've had in my stash for ... more than ten years, scarily enough. They were just waiting for this project! I made the case to be a loose fit, knowing that I'll try to get A5 paper in there as well as the machine itself as its sort of a convenient size!