21 Dec
2008
We’re hosting Christmas for family this year (actually its Kevin’s family, but that’s a technicality), and between preparations for that and having a new camera in the house, I have some nice photos. After all that we’ve done on this house, suddenly it feels like its coming together into a real home. 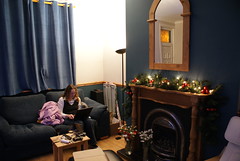 The garland on the mantlepiece (the mantlepiece that I dismantled, sanded down, and restained earlier in the year) is a bit of a craft project. I’ll write a separate post at some point but suffice to say the baubles were in the discounted set that I wanted because it had snowflakes in it. They are attached to a plain garland with cable ties, and a set of lights my sister left behind added in too.

I also have a photo of the Christmas tree, I really like this photo (thanks Kevin!) 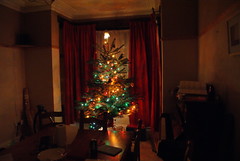