31 Jan
2008
I opened a metaphorical can of worms the other night. While fillering the last few holes in the last wall in the living room, almost ready to paint, I saw a break in the plaster and some black furry mould growing there. Now the wall had been a bit mouldy in other places but we just took some panelling off the walls and the room was a kitchen at one time so we didn’t think a lot of it. So I chipped away at the crack, just to make sure there wasn’t anything bad going on.

It was kinda black and furry underneath the plaster too, and I started to find layers of stuff under the plaster … 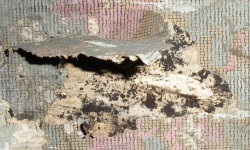 At this point the smell of damp and the slightly wet wallpaper layers coming off the wall started to ring alarm bells and we started scraping to see how big the area affected was. 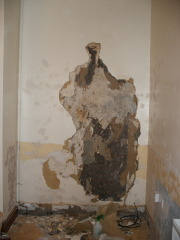 By the time we had got everything off the wall that we could, beyond the edges of the apparent damp and back to the original plaster covered with five distinct layers of (amazing, retro) wallpaper, then artex, then more plaster, then painted, we ended up with this: 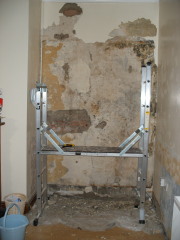 We think this is all due to there having been a broken downspout exactly on the other side of that wall, it was broken when we moved in and we don’t know how long it was like that. Its now fixed and the wall seems to be drying out OK on the inside.

However that leaves us with several large holes in the walls in that room, from rewiring, boiler removal, panelling removal and half a wall that wasn’t plastered in the first place for reasons that aren’t clear. There is also a weird bit in the ceiling after the shower leaked through it and we had to replace a whole section. It turns out that it is going to cost less than 400 pounds to have the whole thing, walls and ceilings, completely skimmed to flat walls and proper corners … so they are coming on Wednesday to do it. We weren’t planning on it but at least then we’ll be able to paint and the walls will be much more beautiful than anything we’d manage ourselves.

One thought on “Wall Worries”