10 May
2009
Yesterday saw the PHP North West User Group hold their first Test Fest in Manchester. As a relatively young user group (at less than a year old) with not a single @php.net email address between us, this was an ambitious venture. Scott MacVicar very kindly offered to come and be our mentor – to show us around PHP and get us started writing tests, and in fact he did very well and everyone was able to begin quite quickly. 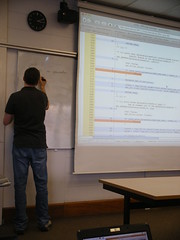 With 14 attendees to support, Scott had his hands full but between all of us we managed 84 tests which was very impressive!! Most people seemed to pick it up really easily and I’m almost certain that there will be a few more tests coming in from various people who were there on the day – which is great because the increased test coverage really does make a big difference to PHP itself. 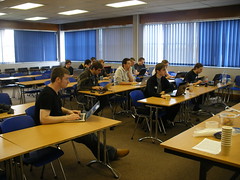 I’d like to say a huge thanks to everyone who turned up and wrote tests, to Scott for coming and dragging us all through the process with such good humour, to Salford University for lending us the space for the event and to Ibuildings for sponsoring the event and making it all possible! There are a few more photos as well – a huge well done to everyone who took part, here and at the other test fest events!