02 Mar
2009
Last week I was in London for the annual PHP conference held by the PHP London User Group. One thing that makes this conference different from any others I’ve attended is that its organised by volunteers. Another thing which makes it unique is that I have attended more than one of these annual events: this is my third year in attendance here, whereas I’ve yet to attend any other conference more than once.

This year had quite a different feel from the other times I’ve attended. With a “real” conference venue at Olympia Conference Centre and talks by big-name employers rather than the usual round of community luminaries, I wasn’t really sure what to expect. In fact for the first time I didn’t even try to attend talks in every slot, since there weren’t so many that appealed to me. Of the talks I did see however, I can only give great praise for the most part. I was completely taken by surprise by Aral Balkan’s “The Future’s So Bright, I Gotta Wear Shades” talk. I mean, put a trendy guy with a cool name who claims to be a flash developer together with a cheesy talk title and make it the first talk of the day … I mean, meh. However, I was very happily surprised to find it was a great talk, the audience loved it and I was completely inspired!

The organisers also allowed us to have a stand to represent phpwomen.org which was great. We had little badges and moo cards to give away and quite a few people, men and women alike, dropped by to ask what we were about and to say hi. We had fewer general passers-by talking to us this year than last year. I’m not sure whether that was the more formal setting, because we were there last year anyway and are better known now, or whether the fact that there were actually quite a few women there put the guys off getting too close to the group :) Either way, it was great to have everyone and we made lots of new friends! 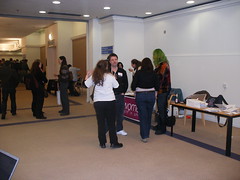 All in all, I had a wonderful time and enjoyed the crowd and all the people I met – both old friends and new ones. See you all next year!