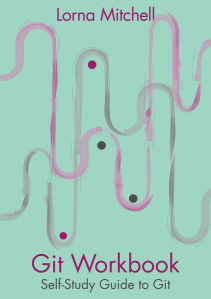 to announce the immediate availability of my new book Git Workbook, costing $20 from LeanPub. This is a book that you “do” rather than “read”; it’s a series of chapters (30 ish so far) each covering one specific git skill.

Each chapter includes an explanation of the skill in question, followed by a hands-on exercise so that you can work through the skill yourself, and ends with a tickbox so you can keep track of how far through you are. It has quizzes, diagrams, mildly amusing stories, and as many other examples as I could think of that could help anyone to take in this technical topic and understand how to apply the techniques covered.

Git workbook is an unashamedly learn-by-doing approach; it is my attempt at bottling up what I know from teaching both virtual and classroom courses on git, and presenting it in a way that an independent learner can use and digest it for themselves, in their own time and at their own pace. I’m a developer, but it’s technology agnostic and I hope that it would also work well for non-technical users of git. The book begins at the very beginning, with no assumptions about what you already know, however if you’re already using git then you can skip the beginning and jump straight to whichever skills you want to add to your git toolbox next – the progress chart that comes with the book tries to summarise which skills are covered in which chapter so you know where to look.

There’s a sample of the book available which includes a few of the real chapters, and since it’s via LeanPub, you also get any future updates for free as well as a money back guarantee. It’s early days for this project, and I do intend on releasing some updates, so if you have feedback for me or if you want to leave a review on LeanPub, I’d greatly appreciate either option!