25 Dec
2012
It’s Christmas and we’re at home this year, which means I’ve been spending a lot of time in the kitchen! This post combines Christmas planning thoughts, a craft project, and some recipes we enjoyed this year – and delivers a surprise to anyone subscribed to the main blog feed expecting only technical content. END_OF_DOCUMENT_TOKEN_TO_BE_REPLACED
15 Feb
2009
I have recently made this “bean something” dish a few times, for vegetarian fajitas, to eat with rice, and also as filling for baked potatoes. Its yummy and even better I can feed it to a friend with a requirement for meat-free, dairy-free and gluten-free food! Here’s the recipe:

chop the onion and fry in a little oil. When it is soft, add the rest of the ingredients and simmer for fifteen minutes.

13 Jul
2008
There’s a birthday in my household this week so I have been making a surprise cake, which I do every year. Apart from the year where all our stuff was in storage and I only had fairy cake tins, where I made surprise fairy cakes instead! This year I went slightly overboard and created a circuitboard cake! In fact it was an astable multivibrator circuit, in case you’re interested – see http://www.play-hookey.com/digital/experiments/rtl_astable.html.

First I made the cake, and dyed a whole load of white roll-out icing green. I also dyed myself green which you would think would give away my secret mission but happily he is less observant than I feared. Then I iced the cake – this was my first mistake because I forgot to put something over the cake to make the roll-out icing stick! Usually either watered-down icing or jam is good.

I had a whole stack of packets of sweets to use to create the components from. I needed transistors (round liquorice with a flat bit sliced out of them), LEDs (jelly dolly mixtures), capacitors (round dolly mixtures), and resistors. The resistors were easily as complicated as the whole of the rest of the components put together and next time I will just buy as many colours of write-on icing as I need to do the stripes! In the event I made the stripes out of various things wrapped round marshmallows, including red laces, the offcuts of the green icing, bits of liquorice chopped really small, and (for the orange and brown) coloured bits of dolly mixture, separated from the white bits of sweet, mashed together, rolled out, and then cut into strips.

So, here’s the finished article (and a closeup of a couple of the components) 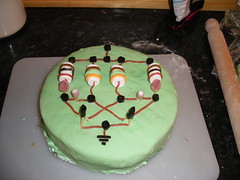 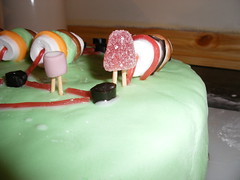