25 Dec
2012
It’s Christmas and we’re at home this year, which means I’ve been spending a lot of time in the kitchen! This post combines Christmas planning thoughts, a craft project, and some recipes we enjoyed this year – and delivers a surprise to anyone subscribed to the main blog feed expecting only technical content. END_OF_DOCUMENT_TOKEN_TO_BE_REPLACED
15 Feb
2009
I have recently made this “bean something” dish a few times, for vegetarian fajitas, to eat with rice, and also as filling for baked potatoes. Its yummy and even better I can feed it to a friend with a requirement for meat-free, dairy-free and gluten-free food! Here’s the recipe:

chop the onion and fry in a little oil. When it is soft, add the rest of the ingredients and simmer for fifteen minutes.

29 Nov
2008
This weekend I got a chance to try out a recipe I’ve had my eye on for a while. Its this Spicy Cranberry Chutney which I’m making as christmas presents (home made presents – way nicer and way cheaper!). Here is it in progress, and in the jars when it was finished:

Its very sweet and not very spicy because I (predictably) didn’t check I had everything I needed so I had to improvise wildly – and the missing ingredients sadly were the ginger and the pepper. Still, Its very edible and I can see this going with cold turkey very nicely on boxing day. I’m also planning some apple-something (apple jelly perhaps?) since I have a few apples that need something doing with them: 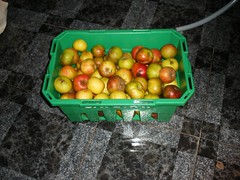 02 Mar
2008
This is the recipe for the cake I made for php london, its a “Farmhouse Cake” apparently but it reminds me of Dundee cake and keeps really well for a good couple of weeks in a tin, which can often be useful!

Preheat the oven to 160 degrees C, and grease an 8 inch deep cake tin (I have a great one with a bottom that comes out so the cake comes out in one piece).

Cream the butter, sugar and orange rind together, then add the eggs a little at a time. Fold in the flour, then stir in everything else and put the mixture into the tin. Cooking time is 2 hours 15 to 2 hours 30 minutes – but keep checking on it and if the top starts to burn then cover it with greaseproof paper.

Today’s recipe is the obligatory follow-up to Shrove Tuesday yesterday. I had actually forgotten it was pancake day until I got in from the gym starving!

weight the flour (sift it if you like, I never bother), add the egg and a bit of the milk. Mix very hard with a wooden spoon until you have a smooth, sticky dough-like arrangement. Then add the milk a little at a time, stirring it back to smoothness after each addition.

The batter is supposed to be better if you leave it to stand in the fridge for an hour before serving but if time isn’t available then don’t worry.

Melt some butter in a pan over a medium heat. Once its sizzling a bit, add enough batter to cover the base of the pan and wait. When it sets on top, keep waiting until its a bit brown underneath. This is especially important if you are going to toss your pancake as if you try to flip a soft pancake it will tangle. Get it turned over one way or another and let the other side brown too, tip out onto a plate and get some more butter in the pan ready for the next one.

The usual fillings are sugar and lemon juice (freshly squeezed ideally but from a bottle is almost as good) and maple syrup. Last night, in a nod to our late friend Amy who introduced me to this, we had cherry pie filling in our pancakes and they were yummy!

Not sure what else you can eat on a pancake – any suggestions?

Pasta is a great store-cupboard staple and can be turned into a meal as complicated or as simple as you please. In this series of articles on “little meals”, the food that is fast and makes either a good lunch or a small dinner for one person, I’ve already written about eggs and today its pasta.

Filled fresh pasta is the perfect fast meal. Boil the kettle, throw the pasta in the pan, add the boiling water and when the pasta looks done three minutes later, it is. Supermarkets have started doing individual portion sizes (around 150g) and personally I like mine with ketchup.

No, that’s not pasta with mum as part of the dish, that’s pasta as my mother would make it. It goes like this:

Cook some quick-cook pasta. Drain it and return it to the pan. Add some pesto (red, green, spicy, or whatever you like) and add any or all of:

Stir and serve with grated cheese on top. Yum!

A variation is to use another sauce other than pesto – the little stir-in sauces are good, or you can work a variation of the weekday spaghetti carbonara recipe if you like.

Do let add a comment if you try these recipes or have variations of your own!

For a while now I’ve been meaning to write a piece on interesting meals to make in a hurry for one person. I eat at home each day for lunch time and often make something substantial so that I can grab a sandwich later on my way to another activity, but these are equally applicable to an evening meal for one.

The first set of recipes use eggs. They’re nutritious and easy! If you try these recipes, or have variations of your own, then let me know :)

Take a small frying pan, and pop some butter in it over a medium heat. While the butter melts beat two eggs in a small bowl with a fork or wish, grind some black pepper into it as well.

When the butter just starts to sizzle, pour the mixture into the pan and then leave it alone while you prepare your filling. Fillings can be any combination of:

When the egg is mostly set, and brown underneath, scatter your filling across half of the surface area and then fold the rest of the “pancake” over the top of it. After two minutes, flip the whole thing over and give it a couple of minutes on the other side.

Serve with salad, coleslaw or whatever else comes to hand – bread and butter if you’re hungry!

For this you will need some boiled potato left over from last night’s meal which has been in the fridge. Its fast and filling.

Heat a bit of butter in a small frying pan and chop half an onion (the other half will keep in the fridge for a few days but put clingfilm over it or something so the smell doesn’t go everywhere).

Pop the onion in the pan and fry until it softens, meanwhile chop the boiled potato into cubes. Throw that in the pan and beat two or three eggs in a small bowl with a fork, and grind some black pepper into the mixture.

Now pour the egg mixture over the onion and potatoes, and wait. You can try flipping it or I usually pop the frying pan under the grill for two minutes to finish off the runny egg that floats on top.

Again, serve with salad or whatever else comes to hand. You can extend this recipe to include leftover vegetables also.

This is a good lunch for a cold day but probably isn’t a meal on its own. You could grill some bacon to go with it.

Put a small saucepan on the hob over a medium heat and add quite a lot of butter (two heaped teaspoons of butter, although I don’t think that’s a traditional measure!). While it melts, beat three eggs together in a small bowl with a fork, add some black pepper.

The key to this dish is not to try to multitask so you should get the plate out of the cupboard, make the cup of tea to go with your toast or whatever at this point. Oh and put the bread in the toaster.

Now pour the egg mixture into the pan on top of the melted butter and stir continuously with a wooden spoon. Just keep on scraping up the mixture all the time from the bottom of the pan, don’t let it form a structure. When it starts to look like scrambled egg, its done. Take the pan off the heat and leave to stand for one minute (allows it to finish cooking and kind of set), then spoon over the toast.

Eat this with relish, salsa, barbecue sauce or whatever you think goes.

I often put the slow cooker on when I know that there are going to be people coming and going and wanting feeding at different times in an evening. I usually do a fairly standard chicken casserole but the last couple of weeks I’ve experiemented with beef. One of them was rather improvised (didn’t check the cupboards before I started) but it wasn’t too bad, so I thought I’d share both recipes here.

Take some beef (about 400g in this case) and brown it with some oil in a frying pan. Once its sealed all over, pop it in the slow cooker with a tin of chopped tomatoes and a tin of kidney beans in chilli sauce. Now leave it for 8 hours or so.

Take some beef (I used 400g again, but it doesn’t matter), brown it and pop it in the slow cooker. Chop up an onion and a couple of carrots (and any other veg that come to hand) and pop them in the frying pan with some more oil. Use a whole stock cube and half a pint of boiling water to make some stock (this is different from the proportions in the instructions but it works). Once the veg starts to go soft in the pan, add some stock and let it simmer for three minutes. Stir in some cournflour and then add the contents of the pan to the slow cooker. Add the rest of the stock and a tin of lentil soup to the slow cooker. Leave it alone for eight hours.

An easy tomato sauce recipe to make in the microwave.

Slice one onion and put it in a microwaveable dish. Add one tablespoon of olive oil and microwave on high for three minutes.

Add one tin of chopped tomatoes, some tomato puree (one tablespoon or one of those little tins). If you don’t have tomato puree, ketchup is fine but not too much. If the tinned tomatoes are budget supermarket ones, add one tsp sugar. Add pepper, salt and herbs (basil is good) and microwave for three more minutes.

If you have a hand-blender, “zuzz” the mixture until it is coarse rather than actually chunky. Leave to stand as long as you like, then when you are serving up the food, pop it back in the microwave for another minute.

This week we kind of ran out of food … so here’s my recipe for improvised spaghetti something.

Dice two chicken breasts and place in a frying pan over a moderate heat with some oil.

While the chicken starts to brown, chop up a few slices of bacon into little bits (I use scissors which seems to work well), and put the kettle on for the spaghetti.

Make cheese sauce, and put the bacon in with the chicken once the chicken has started to brown.

Put the spaghetti on to cook (you need to do this earlier on if its not quick-cook!), and when the chicken and bacon is cooked take it off the heat.

Put the cheese sauce in the microwave for its final minute and drain the spaghetti, returning it to the pan. Throw the chicken and bacon in on top and pour over the cheese sauce. Stir and serve.