26 Apr
2009
A few years ago, when my little sister turned 21, I made her a crochet love-knot wrap. She's used it (as a warm scarf) since then but recently lost it moving between multiple different places in the French Alps while working as a nanny for a hotel chain. So I made her a new one: 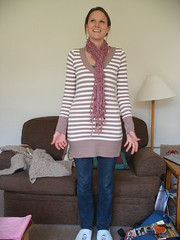 Its the same design as before, using a "love knot" or "Solomon's knot" stitch to create an airy web of a wrap that can be worn either over the shoulders or bundled into a scarf as shown. I used a cotton tape yarn since she's just about to leave again to go and work in Portugal so woolly wouldn't be a good choice, this yarn used to be a cardigan I bought but it had daft sleeves so I unravelled them but never did anything better. 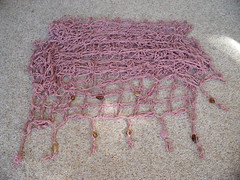 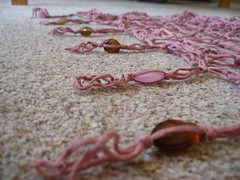 Here's hoping she hangs onto this one at least as long as she managed for the last - safe travels, little one!

23 Sep
2008
Yesterday I attended my little sister's graduation ceremony - she has a BA in Early Childhood Studies from University College Birmingham and I am so proud of her I can't actually express it! She's worked hard to get to here and the path was not always smooth. I uploaded a selection of pictures from yesterday to remember the day by. 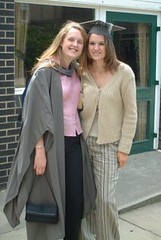 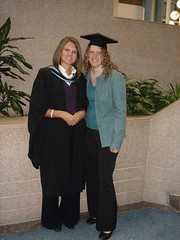