11 Feb
2009
On 18th February, I’ll be making an appearance at Geekup Leeds, to give a talk entitled “Linux-Fu for PHP Developers”. Basically this is a tour of some of my most-favourite command line tools available in Linux, and its a pre-cursor to the talk I’ll give later this year at php|tek in Chicago. What’s different about the Leeds version is:

I’m not panicking exactly, but I am thinking I need to get some practise in and decide which commands need to be included in this initial short talk version. Suggestions welcome, add to the comments please!

01 Jun
2008
Recently my friend Deb, Leeds Geekup organiser and Ruby developer, gave me two baby courgette plants … she even went so far to photograph me, slightly tipsy, leaving the pub to get the bus home: 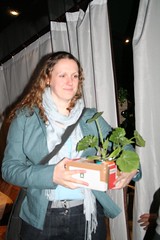 I did get the plants home intact and planted them out. I was going to post a whole garden post as I have a few other things also to plant, but I’ve been elsewhere all week and now its raining rather a lot, so I’m blogging instead. Here’s the courgette plants in their new home: 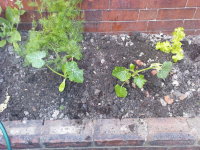 Waiting for my attention are some sweet peas given to me by Great Uncle Sid and some training lobelia I bought yesterday to try to improve the view from my new kitchen window … more about those another day.

14 May
2008
So last night, more or less on a whim, I popped to the Geekup that was on in Manchester. I was slightly alarmed when I enquired at the bar where the event was and was told there was nothing like that booked for that night … anyway I wandered outside and found 30 or so people looking likely … predominantly t-shirted white males standing around slightly awkwardly, with an above-average ratio of laptop rucksacks :)

It was only after an hour or so when I properly looked around me, I realised I was the only woman there. The only one?? You can’t tell me there are no female geeks in Manchester, I refuse to believe it! Manchester is one of the most vibrant and happening cities I think I’ve ever been to in my life. Seriously, what’s going on? I can only think that either there really are no female geeks in Manchester, or there are – in which case they’re either oblivious to geekup or they’re avoiding it.

So, for what its worth I had a perfectly nice time and chatted to some interesting people (thanks guys!) but I would love to know which scenario above is actually the real explanation. If you have a theory then please post a comment!

08 May
2008
Last night I attended and spoke at the First Sheffield Geekup held at the Fat Cat in Sheffield. My talk was entitled “Deploying Web Projects with Subversion” and you can see the slides for that at http://www.slideshare.net/lornajane/deploying-web-projects-with-svn/.

Overall I think the event was well-organised, there were certainly plenty of people there and we had a projector, speakers and a room so it pretty much ticked all the boxes. The Fat Cat is a nice pub, with good beer, but for those of us coming from further afield it was a bit tricky to get to as its not exactly handy for the station. The evening was good however I felt that the timings slipped badly – I was the first speaker and although there was somthing else happening earlier on, the talks aimed for 7:30 were actually nearer 9pm … so a couple of pints later than I was expecting my audience to be and I think my talk came across as rather dry as a result! Also since one of the speakers ran over his time completely (now I understand why other geekups sit with a stopwatch and click the slides through for you!), I had about ten minutes after the talks to hand out a couple of business cards and answer a few quick questions before I had to dash off for my train. All of these though are only teething problems and I think everyone had a pretty good time, so well done to Jag for getting it off the ground … here’s to next month!

30 Apr
2008
I was very pleased to hear that Sheffield is getting its own Geekup event, and that it starts next week on 7th May and will run on the first Wednesday of every month. I was even more pleased to be asked to speak at it – I’ll be giving a 20:20 format (20 slides, 20 seconds per slide = 6 and a half minutes) on “Deploying Web Projects with Subversion”. Come along to The Fat Cat on Alma Street at 6pm for lots of fun, beer, and chatter!
17 Apr
2008
I did mention recently that I had arranged to speak at the local GeekUp group. Well, the event itself was last night and although I did have speaking nerves I think it went OK.

I’ve uploaded the slides I used to Slideshare, so you can find them here. The talk was entirely based on a talk Ivo Jansch gave at the PHP London conference in February.

I’m trying to work on my speaking skills as I’ve been asked to speak at the Dutch PHP Conference this summer, if you were there and have any comments then let me know! Thanks also to everyone who did come and say hi and give me feedback on the night :)

Edit: I see there is photographic evidence – thanks Deb and Nigel!

If you’re local to Leeds, I’d love to see you there.