03 Nov
2009
I spent the last few days in sunny Spain at the PHP Barcelona conference as a speaker. Happily the most reasonably-priced flights gave me some time while I was there to get into the city, I was very keen to see it because I haven’t been before. The trip was made much more enjoyable by our gracious hosts who transported us between the venue and hotel most nights (and it was a very nice hotel too!) and arranged a speaker dinner that I thoroughly enjoyed.

The conference itself was excellent – I spoke about “Working with Web Services” which is basically an overview of everything you need to know to be able to consume web services. The slides for that are online at http://www.slideshare.net/lornajane/working-with-web-services.

I also saw some great talks from the other speakers there, some were people I often see at conferences, others were familiar names, and yet more were people I’d never heard of but I certainly learned a lot from all these groups. One thing that struck me was that the majority of the conference talks were in English – my experiences from looking at these events in southern Europe is that they tend to be held in the local language which of course makes them much less useful to me. This event was predominantly in English, the introduction and (most of) closing session were in English, and most of the talks were too. Whether this signifies a shift in the culture of technical events in Spain or whether this was simply a nice decision by the organisers I’m not sure.

I also made it out into the city which was beautiful. When I publicised my trips, so many people sent me information about their favourite places to go, trips to take and so on that I dubbed Barcelona “city of memories”! I didn’t make it to very many of those this time around but I’ll definitely return to the city in the future – its simply breathtaking. 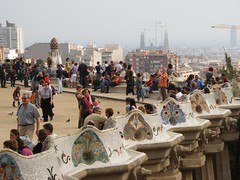 Congratulations to the organisers – I’m looking forward to the event in 2010 ;)

31 Oct
2009
A very quick entry today to mention a site that I’ve been using a LOT lately and I know I will be relying on for large quantities of travelling right through November: Accessible UK Train Timetables. It has up-to-the-minute information, including platform numbers, and you can bookmark queries for the next train between two points along with some other very cool shortcuts.

A site like this, which presents information very cleanly and I can easily use off my phone, is an excellent example of a good use of published data and I’m very grateful to them for this resource which really helps me when I’m out and about!