21 Jan
2009
I’ve already written about my time in Peru – in the rainforest and in and around Cusco. From Cusco we travelled to the city of Puno – by amazing train journey on the Andean Explorer. This trip is more expensive than flying I think but it was a fun experience in itself!

The trains themselves are first-class, 1920s style affairs with armchairs for seats and silver service. 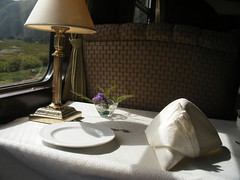 The train was in a time warp, with organised events (live music, pisco sour distribution (at 10am!), and even a fashion show of wildly expensive knitwear), and silver service performed by synchronised teams of waiters who leaned to either side of the aisle in time with one another. The food was nice but the dancing servers reduced me to giggles every time they arrived.

The views were spectacular, as we left Cusco and travelled through the Andes and across the Altiplato – a large (HUGE, this was a 10 hour train journey) plateau between the two sides of the Andes – and along to Lake Titcaca. The whole trip is at altitude – like a normal landscape, but 3000 to 4000 metres above sea level! 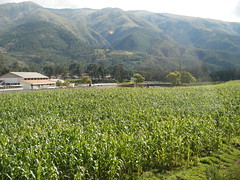 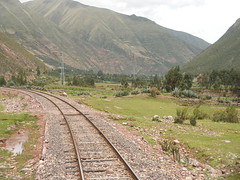 The train lines in Peru are kind of exciting in that they often run along streets and are completely unenclosed. There are animals, people, vehicles and who knows what else all along the tracks, its madness! In Juliaca (a place just outside Puno), there were lots of little stalls with bits of car parts and so on, seriously a different world. There are more photos in my flickr set for this part of the trip.