22 Jan
2009
In my blogging excitement, I somehow managed to write about the rainforest, areas around Cusco and Ollantaytambo and then go straight on to describe our train ride to Puno. In a rather major omission I seem to have missed out a post about visiting Machu Picchu. Since its one of the seven modern wonders of the world, its quite a serious oversight, which I will now fix.

Machu Picchu is a mountain-top city built by the Incas – the people who ran a large South American empire until the Spanish turned up and did it better (and more violently by the look of it). There are two things which immediately struck me as odd. Firstly, this city is very nice but its on the top of a mountain in the middle of a cloud forest … not exactly well-connected. Secondly, despite all the emphasis on heritage and that the whole thing was lost under forest for a few hundred years and then rediscovered – this isn’t actually an ancient site and is in fact only about 550 years old. Which is old, but to a European, not that old.

The day we visited was very wet so although I have approximately the usual selection of photos, some of them are quite eerie, with layers of cloud appearing at funny heights and giving an illusion of the whole city levitating in the mist. 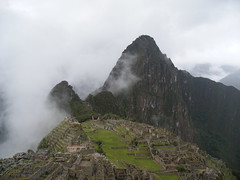 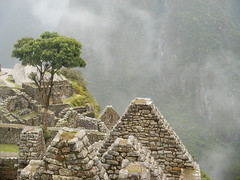 We got absolutely soaked on this trip, and since we’d stayed overnight in Ollantaytambo, quite a lot of our stuff got very wet as well. Happily this means I also have have the tourists-in-rainbow-coloured-ponchos photo again. 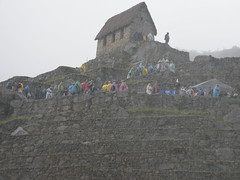 Its an absolutely awe-inspiring sight (did you know “awful” at one time meant “full of awe”?), and although the site is quite large, we did brave the rain and explore pretty much all of it. We had a guided tour and then some free time afterwards and despite the inclement weather it was a stunning place to spend an afternoon. Also, we’re British – proper raincoats, sensible shoes, quick-dry trousers and a packed lunch are an essential part of our kit, even if its sunny in the morning!

There are a few more pictures in the flickr set for the day in Machu Picchu if you are interested, I tried but the photos really don’t do it justice.