24 Jan
2009
This is an update on part of my trip to Peru. You might also like to read about the time spent in the rainforest, in and around Cusco, at Machu Picchu and en route to Puno on the Andean Explorer. Next we spent a couple of nights in Puno, including a day trip to Lake Titicaca.

Lake Titicaca is pretty amazing – you could believe you were by the sea if you forget that this “sea” is in fact almost 4,000 metres above sea level. In fact its the world’s highest navigable lake, formed in the lowest-lying part of the Altiplano between the two sides of the Andes. We started our trip with a visit to Uros, a place which consists entirely of floating islands made of reeds. It sounds surreal and when you go there, it is. 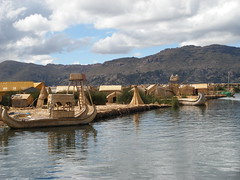 The islands do float; you can feel the slight movement below your feet. And everything, everything is made of reeds. They peg the islands to the nearest reed bed, and then their houses, boats, and even meals are made of this one kind of reed. We got a short talk about the culture while we were there, and then a chance to ride one of the reed boats to another island. The culture there is pretty isolated, they have primary-age schools and everyone still wears traditional dress. They are well-adapted to tourism though, while on our reed boat ride, the 4 daughters of the family came to the tourists, sang a song in each of about 4 languages, and then sent the littlest daughter round with a hat to collect money :)

After Uros we went to another (normal type) island on Lake Titicaca, called Taquile. Taquile is recognised by UNESCO for its knitting traditions, and indeed the textiles we saw here were pretty amazing (although too traditional for me to want to bring anything back to use in my world). Again we saw the adaptation of the locals to tourism, one family had opened its garden as a restaurant and we went there for our lunch. While we were there they demonstrated their dancing and handicrafts, and allowed us to buy things of course! Here’s some of the dancing: 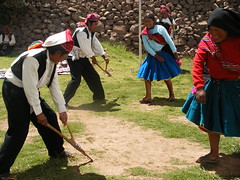 What I found most interesting about Taquile was their society structure. Now, I don’t know much about societies in general, and I haven’t travelled a lot – but I’ve never heard of a place where everything is run on what you are wearing on your head!! In the photo you can see the girls have “mantles” – just like a head covering – whereas the men wear hats. Both mantles and hats tell about a person’s social status. A mantle with big, bright pom-poms on the corners belongs to a single woman, but with more demure tassles belongs to a married woman. The men start wearing a hat that is red at the head and white further up as soon as they can knit, and this denotes their can-knit-but-not-married status. Only the men knit on Taquile (this was common around the world), the women spin and weave. The married men wear red and blue striped (and intricately patterned) hats, knitted for them by their wives. And if you see someone in a really crazy flourescent hat with ear flaps … then stop laughing and take him seriously, because he’s the mayor :)

Another thing we learned was that on Taquile, divorce doesn’t exist. But the couple can’t marry until they have already lived together for 1-2 years, during which time they can change their minds and go back to their families. The hats made me laugh but it does seem like these people have a society that really works.

We climbed up to the main square (habitation on the top of hills seems in fashion in this part of the world) and then down the other side, there were a *lot* of steps! 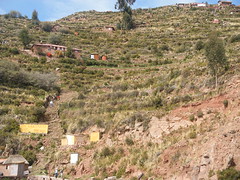 On the way back to Puno on the boat, a storm blew up on the lake. We had a pretty scary couple of hours with a small boat on very big waves trying to get back in to port – it was pretty clear even without understanding their words that the crew were very concerned as well. I’m usually very seasick but wasn’t actually sick this time. The waves were big enough that finally I understood why people tell you to look at the horizon, I don’t think I’ve been in big enough waves until now! 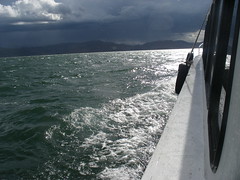 The next day we had some free time in Puno. We walked down to the market at the port and since we were pretty early (about 9:30am), half the stalls weren’t open and the stallholders weren’t awake enough to pester us too much. We did quite a bit of shopping here, there were plenty of nice things to choose from. We also found a bus containing information about birds and fish of Lake Titicaca. Since we were with Cally (who teaches Biology), we couldn’t give this a miss so we went on. The whole bus was full of stuffed birds and fish which were native to the area, with their Spanish, English and Latin names (how useful!). It was very cool and we discovered that we really had seen flamingoes in the distance the previous day (they looked convincing, but we thought they were African).

We followed this with a frankly horrible lunch (but lovely coffee and cakes somewhere else a bit later) and had a look around Puno itself with some great views of the lake. 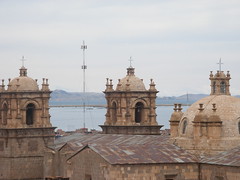 We went in the cathedral and I was, once again, taken by surprise by the use of iconography. I know, its a catholic country, I just somehow find it surprising. It was a beautiful building though and set in a nice square. We sat on the steps and fended off the street sellers and watched the world go by – it was a pretty cool afternoon! We then headed off to catch our flight back to Lima.

One thought on “Peru: Lake Titicaca and Puno”