25 Jul
2011
A year ago, I left my job at Ibuildings and went freelance. At the time, I didn’t really know what I wanted to do next, and I was excited about the opportunity to try out a few different things. I blogged about my new (ad)venture when I launched it, but I haven’t written much since and people keep asking me for updates – the anniversary seems like a good time to reflect.

Well, I still don’t know what I want to do next, but that seems like less of a problem these days. I’m busy but in a planned-in-advance, only wearing myself down because there was something so exciting I couldn’t say no, kind of a way. I am not a great fan of travel, and have always tried to avoid it, but in fact so many interesting things came up this year that I ended up on the road more than ever. It turns out that there is a world of difference between being sent somewhere on short notice, and planning a series of interesting professional engagements that just happen to involve being away from home a lot all at once. And if I don’t want to go: I don’t go. It’s amazing how many people will wait til next month if you ask them!

My main aim, when I gave up my previous role, was to pay my bills and do interesting projects. I had enough savings to see me through until the New Year and I really thought I’d be looking for a “proper job” in around January. A year later, my time books up typically weeks in advance, which is very encouraging and exceeds my original aims. For me the high points of the year were:

I’d be lying if I said it had all been plain sailing. Without putting too fine a point on it, self-employment is much less profitable than it was having a salary. One person does not scale well, which means that I’m either working 80 hours a week and turning down work, or I’m doing a really wonderful job on my next conference talk, while wishing the phone would ring! Conferences definitely run in “seasons”, so you can bet that the month after the conferences is always a lean one, as speaking at events costs money as well as costing work time. I love conferences but I’m getting to fewer events, especially international ones, as a result, and making those decisions on business reasons rather than for the content or community is a bit sad.

That said, I’ve avoided a lot of the pitfalls that I was afraid of, and I’m not much more crazy than I was a year ago, so on the whole I’d say it’s been an excellent move. I also notice that I have taken as much holiday in a year as I took in the previous two in a regular job, which is either good or bad depending which end of the work/life balance seesaw you are standing next to!

I spent most of the winter with the builders in the house. “Ugly” is no exaggeration as my kitchen ended up looking like this: 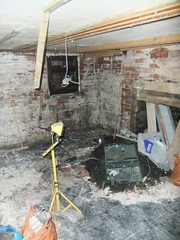 While the finished kitchen looks amazing, four months of trying to run a business from a house where people are knocking down walls and need project managing really isn’t a recipe for success. It also cost a year’s salary (in old money) in total, which is sort of awkward when you don’t have a steady income! From here, it doesn’t look like such a disaster, but at the time it was a big impact and took up a lot of my time and energy (cooking on a camp stove, washing up in the bath, yuk), and definitely deserves a place in the story of the first year.

What’s in my immediate future? Well, more of the same, by the look of it! I have a series of development projects (some spare days in September still, so if you need me then let me know) coming up, plus some various training to do. There’s a complete re-work of lornajane.net which will be public as soon as I find the time to migrate all my content to the new platform (moving to wordpress, magmadigital created the new theme and it is gorgeous and not even a hint of pink in sight). I’m deeply involved in my open source project joind.in, and in the PHPNW11 conference which is coming up soon (and I’m giving my web services tutorial, yay!), so life is as busy as ever.

Most of all, I hope that the interesting projects keep on coming in, that I keep on being able to pay my mortgage, and that most of all – that I’ll always enjoy it as much as this. Here’s to being able to say all of this in another year’s time!

7 thoughts on “Celebrating One Year in Business”