13 May
2008
We've been decorating the living room since what feels like forever, I'll post some proper pictures of it finished but here is a sneak preview of the photos I took of the new nest of tables that's been waiting for us to finish decorating for a few months. I finally put them together at the weekend.

11 May
2008
Last night we came home at around midnight and disturbed an intruder. Nobody hurt and nothing taken, is the short version.

We got back, walked up to the front door and I decided I needed to water my plants as they were looking at bit sad. So I went up the side of the house to the back to get the watering can while Kevin went in the front door. The back of our house is pitch black at night but I know it well so I just wandered round, right along the back of the house and grabbed the watering can. I then looked around and realised there was something moving in the dark ... something very big. Eventually this heaving shape resolved itself into a man climbing out of my kitchen window at which point I started SCREAMING. Forget panic alarms, I was easily louder than any of those, the whole street must have heard me.

As I was only about 4 feet from the man in question, he must have got a fair fright as well (who wanders around back gardens in the pitch black at midnight after all??). Seems like he heard Kevin going in the front and scarpered back out the way he came in. Of course Kevin, in the house, has no idea what is happening other than there is screaming outside the house ... I can't imagine what was going through his mind when he realised it was me screaming. Anyway I ran back to the front, went in the house and after some total incoherence explained to Kevin what I'd seen. At which point we had no idea if there was still anyone in the house or anything.

I rang the police and our neighbours were also out asking if we were OK, they very kindly helped Kevin check if there was anyone else in the house. The police responded quickly and were very good, which is great. I'm sure they had enough going on on a Saturday night! Anyway the fingerprint people came this morning and got a good footprint from the kitchen counter, which was very interesting as I've never seen them do that before.

To cut a long story short, we are fine, nobody was hurt (although we both got almighty frights), and nothing was taken. The window is boarded up now and we will get it replaced as quickly as we can. It seems like the intruder thought we were upstairs asleep (car on the drive, no lights on, midnight), and it was just very lucky that we got back when we did, there was no sign that he had been anywhere other than the kitchen.

20 Mar
2008
Its Easter, which means its the only time of the year we reliably get 4 days off in a row from work without taking leave. And one thing I don't have is a lot of holiday allocation. So, we've got good intentions of getting as much as possible done in the house (or at least, I've got good intentions and will rope in anyone who crosses the threshold). Apart from a whole lot of cleaning and catch-up in the house which is normal, I'm hoping to get some or all of the following done:

We do have help (anyone else at a loose end please feel free to come over as well!) but if we get half of this done it'll be a miracle, wish us luck and have a good weekend yourself :)

On Monday I start my new job and I'll be mostly working from home which will be nice, but quite a change. I have a lot of online friends that I have yet to meet in real life but to have a whole set of colleagues, some of them in another country (IBuildings is a Dutch company) is all new to me. It'll be nice to avoid the annoyances of sharing an office, with other people's music and cleaning up after others too. I know I am organised and self-motivated enough to manage the working patterns as well, which is one less thing to worry about. If I had needed to be in the office every day, I simply couldn't have managed it as they are based in London. In preparation for next week, I thought I'd share some photos of my home office. To the left are my flower pictures that I found in a box when we moved, they came from another house we previously rented.

I also have some essential accessories for any office: A map of the world and a nabaztag. This one is called Tag and is our second one of these rabbits. 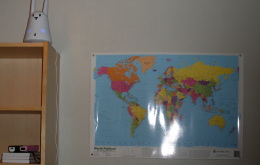 Finally, check out my lovely big office chair, modelled here by my Christmas bear, now named Busibear as he lives in the office and oversees business. The chair was a birthday present from my parents, thanks mum and dad :) 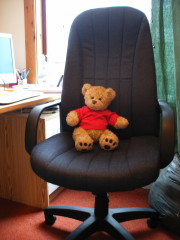 I have a nice new notebook and a futon for any visitors that pop in, I think I'm all set...