15 Feb
2010
Recently I’ve been doing some bits and pieces with the open sourced event feedback site joind.in, including some work on its API to facilitate development of an iphone app. As a conference attendee, speaker and organiser, I use this site a lot for the various events that I am involved with and its a great asset.

My boyfriend Kevin was thinking of developing an iphone app, mostly to find out more about the technology, and I suggested he take a look at the API for joind.in and consider building something on that. The joind.in project belongs to enygma, a.k.a. Chris Cornutt from phpdeveloper.org and he has the code available on github – so we grabbed it. The API wasn’t previously used by much so we were able to tidy it up a bit and then consume it from the iphone to suit our needs. Chris has accepted my alterations to his existing project with grace – even when I’ve totally broken the live site with them!!

The joind.in site is a classic MVC setup and the API already existed within the application. It is implemented with a separate set of controllers for the various actions supported by the API, which all inherit from a controller which handles the output formats etc for the XML and JSON responses. It isn’t the world’s best API but its perfectly sufficient for the task at hand – I intend to write some examples for using it but until then you can read this post from Derick about how he used the joind.in API to pull in comments on his talks onto his own site.

The app itself has the core functionality of joind.in that an attendee would want in his pocket at an event. The events and their details are there, along with the talks at each event. Attendees can leave comments on the various talks and socials, and these can be browsed in the app as well. To give you a little taste of the app, here are some screenshots: 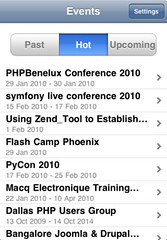 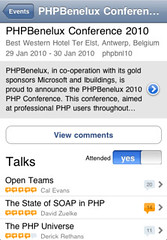 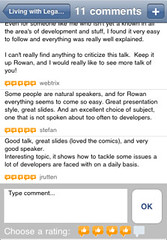 If you have an iphone or ipod touch and you’re attending an event any time soon, then download the app – its under “utilities” in the app store. Comments, suggestions, bug reports and feature requests are all gratefully received (no promises about fixing/implementing them but we’ll do our best!). Our app went from submission to approved in 3 days which is very fast – thanks apple!