03 Sep
2013
For the last … really long time … I’ve been working on a place to put the cookery books in the “new” kitchen. Since the kitchen was finished early in 2011, that’s been quite a long-running project! It’s finally finished though and I thought I’d share a bit about how I made it (not least because I get nagged about the lack of non-geeky posts on this site – you know who you are!)

The inspiration came from this post on Ana White’s site (warning, if you are crafty and not afraid of woodwork, this will cost you the next three weekends of your life!). I adapted the plans for the entryway storage and squished them a bit to make the shelf fit in the space over our cooker.

The start of the project was good, lots of measuring and planning, and then a trip out to buy wood. We live near to a B&Q Warehouse so they have everything you could ever need, it just can take time to find things! They will also cut wood to whatever sizes you need, for free, so it’s well worth waiting til you know what exactly you are aiming for and getting that done. I had a bit of help from my friend for cutting the curvy bits with the jigsaw, but I pretty quickly had a set of shelves: 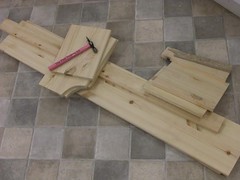 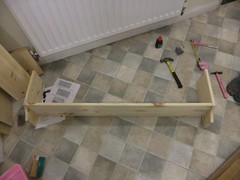 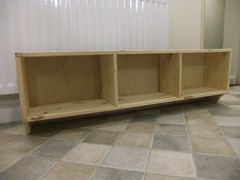 Flickr says this was March 2011, and I bought the paint at the same time as the wood or a couple of weeks later … but this project stalled in a big way. Partly I was busy, but mostly I lost confidence … so we’ve been moving things around in the basement with this piece of furniture in the way. Even more frustrating, my cookery books were still in the box they got sealed into in October 2010 when we moved out of the old kitchen before the conversion. I cook from a recipe about as often as I crochet from a pattern or use a set of plans for a wood work project (as in, NEVER), but I still like to have and read them!

Over the last few months I’ve been working on the undercoat and the paint – gloss takes SO LONG to dry! And really, a second coat would have been better but I was just too impatient and I figure anything I make is always going to look handmade and that’s okay. Anyway, I’m delighted to say that the shelf is safely on the wall (with help from a friend again!) and the books are where they belong. 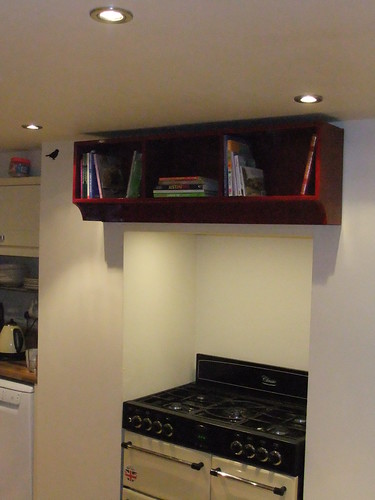