28 Jun
2011
I am a female speaker, and a software developer, which puts me in a fairly small minority at the events I usually attend (I’m a PHP consultant based in the UK, to give you an idea of what kind of events those are). Recently I’ve been asked my opinion more than once on the issue of women speakers being in a minority at technical events, and I’ve also been the “token” women speaker at a technical event.

The worst thing you can do is find some random, underqualified person who represents the demographic you want to include, and put them on the stage. Although gender is often the issue we hear most about, the same applies to anyone who isn’t a young, white male; it’s just that gender is easier to see and talk about than either age, ethnicity, sexual orientation, or anything else, and also since I’m a young, white female, it’s the only aspect I can comment on.Women are in such a minority that they are, almost by definition, representative (see http://xkcd.com/385). Anyone who sees your randomly-selected woman speak will simply go away thinking that women aren’t really good at speaking. END_OF_DOCUMENT_TOKEN_TO_BE_REPLACED

02 Jul
2010
Last month, while in Amsterdam to host the Dutch PHP Conference 2010, I was absolutely stunned (as in, completely speechless – that’s pretty rare for me) to have my PHPWomen friends pull me aside and present me with something: 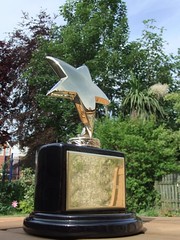 Lorna Mitchell
In recognition of your extraordinary efforts
PHPWomen

Although I took the photos of this outside, this item now has pride of place on my mantlepiece, where I can look at it and reflect on what a huge influence the PHPWomen have been, and continue to be, for me and so many others.

04 Jun
2010
I’m subscribed to a number of women-in-tech mailing lists because, well, I’m a woman in tech. Every few months or so a thread will come round about a technical conference with no female speakers. The issues around this are many, lengthy, and not something I want to write about here (or not today anyway!).

I was pleasantly surprised to note, then, that at the recent TEK-X conference, there was one slot where you could not AVOID seeing a female speaker. While Elizabeth Marie Smith delivered her slightly ranty “Cross Platform PHP”, Ligaya Turmelle was sharing her wisdom in her session “Replication with MySQL”, and in the remaining track there was a community roundtable, with my noble self on the panel! (OK so a panel is not a talk but hey, bear with me!)

I want to say thanks to TEK-X for being an amazing conference, to the community for being generally fabulous, and to the women in particular for being awesome beyond belief – this was a good day :)

02 Dec
2009
I’m halfway delighted and halfway cringing to announce that the phpwomen calendar is now on sale. This was a project organised by my friend and colleague Johanna Cherry, who saw an opportunity at php|tek 2009 to photograph the majority of the core PHPWomen members all in one place and turn it into a fundraising calendar.

If you’re expecting something “Calendar Girls” then you’ll be disappointed. We are all clothed in the pictures!

I won’t share photos from the calendar itself, if you want to see those you can buy your own, but perhaps to give you a hint I’ll share an outtake of myself: 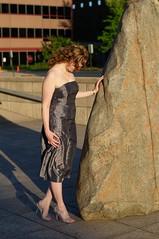 I must confess that I was rather agitated when the photos were taken – as a woman in a male-dominated industry, the risk of being seen as just my physical appearance is ever-present, and I normally try hard at unremarkable, unrevealing clothes with very little makeup and a pair of jeans. Hanging out in the lobby at the hotel during a technical conference in that dress and those shoes was significantly more terrifying than delivering three sessions during my first trip to the US as a speaker (which, considering the problems I have with speaking nerves, is saying something). Even after I saw the photos I was kind of unhappy with the whole experience, although I loved the outtake linked above!

Fast forward 6 months and I had dinner with Derick Rethans, who took the photos in the calendar and arranged the printing, and he showed me the prototype he’d had printed. As I sat and turned the pages, I started to understand why this is so important. The women in these photos are some of the leading lights in the community – respected developers, some of them core developers, key community people, and speakers. Yet I saw them as the women they are … and suddenly remembered that actually, it’s acceptable to be both smart AND beautiful.

So – get your calendar and remember all year that beauties can also be geeks! 10% of every purchase goes to PHPWomen, and we will use those funds to support our women and grow more leading lights like these.

24 Aug
2009
A few weeks ago, phpwomen.org put out an announcement about merchandise. When we first started the group (almost 3 years ago, believe it or not) we printed t-shirts and gave them out at conferences. Once the various founder members and a few benefactors had paid for a set of t-shirts each it became clear that this wasn’t a sustainable venture. So, after much happening in the background getting set up as a non-profit and getting a bank account (thanks mostly to lig!) and a bunch of time spent sorting out two spreadshirt shops (thanks Elizabeth!), it is now possible to buy merchandise online in both North America and Europe! The big problem with cafepress is the shipping costs for everyone outside of North America so spreadshirt seemed like a better option … still not ideal for our members further afield however and perhaps we can work out some better alternatives over time.

So, with great excitement I ordered my new phpwomen shirt (in girl fit!) – and here it is: 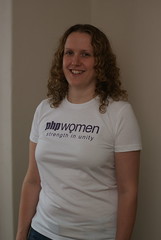 Note: This is the large size … I’m not small but I’m not really that large either so order a bigger size if you are ordering the girl fit shirts.

So, what are you waiting for? Head over to the announcement post and follow the links to order your shirt and support the organisation – just in time for the autumn conference season!

09 Feb
2009
PHPWomen have announced a new competition on their website – to complete a sentence “I am a phpwomen member because…” in a post on their forums to win a prize! Already people are posting and the prize is a certificate to spend at php|architect’s site. Pop over to the forums and join in the fun!
06 Jan
2009
I’m very excited to be able to say that I was published in php|architect, in December’s issue. I had the /etc column, where I wrote a bit about phpwomen.org and what we’re up to these days. As I’ve wanted to write for them for ages, I was very chuffed to be asked and it was fun doing it :)
06 Nov
2008
I was recently interviewed by Cassandra Clark from Sun about PHPWomen – they’ve put the interview live now and you can find it at http://blogs.sun.com/SDNChannel/entry/introduction_to_phpwomen_org
17 Sep
2008
I’m currently in California, at ZendCon. I’m having way too much fun to blog but there is a writeup on the phpwomen site of my experiences so far. I’ve met some great people, and its long days but I’m learning a lot! I’ve (been) volunteered for an uncon session later on today, at 5:15 I’ll be speaking alongside Matthew Weier O’Phinney on “Subversion Tips and Tricks” – if you’re here at ZendCon then drop in and say hi.

For everything else, see the zendcon photos on flickr! http://www.flickr.com/photos/tags/zendcon08

24 Jun
2008
So, at the Dutch PHP Conference, they were making a video and they interviewed me. The video is at http://www.bachelor-ict.nl/dpc and it is also featured in this article on DevZone which is exciting! The video is mostly about the PHPWomen organisation, rather than my talk but it does have some footage of me speaking and of the conference itself.